Racism and anti-racism in Education

This is the fourth post in our miniseries exploring the contexts of racism and anti-racism as part of our action against workplace racism. Tomorrow, we will share examples of actions being undertaken at and by members of Sheffield UCU, based on crowd-sourced submissions. A link to contribute is provided at the bottom of this blogpost.

The University of Sheffield has a BAME Staff Network and launched a Race Equality Strategy and Action Plan in 2019. Yet educational institutions, often thought of as vectors of social mobility, are also ridden with racial discriminations. In today’s blogpost we explore resources that discuss racism in the educational system more broadly, and others which draw on particular examples and experiences to illustrate the lived realities of racism and its impacts on individuals.

A 2016 UCU study highlighted the stark experiences of Black and Minority Ethnic staff in further and higher education in the UK. The study revealed issues around career progression, with an overwhelming majority of survey respondents reporting they had faced barriers to promotion; 59% across both sectors reported they had not been supported by senior colleagues and managers when seeking to progress their career; and about half of respondents saw no positive career development path with their current employer. When it comes to bullying and harassment, around 70% of respondents in Higher Education reported they were “sometimes” or “often” subject to it from managers and/or colleagues, while 86% of respondents in HE said they were “often” or “sometimes” subject to cultural insensitivity. This confirms findings from other literature: Black and minority ethnic staff in UK higher education routinely report being undermined and marginalized whilst their knowledge and experience are frequently called into question (Leathwood, Maylor & Moreau, 2009; Shilliam, 2015) [cited in ‘Staying Power’ The career experiences and strategies of UK Black female professors’].

In August 2020, ten Black women involved in UK research wrote an open letter highlighting the urgent need for greater transparency, accountably and inclusion in the distribution of research funding. Concerns had been raised about £4.3 million allocated by UK Research and Innovation (UKRI) and the National Institute for Health Research (NIHR) to examine the relationship between COVID and ethnicity. £0 was allocated to Black academic leads, while one individual on the assessment panel was also co-investigator of three of the six awards. The letter-writers met with UKRI representatives in October 2020, and UKRI identified actions to be taken. Dr Addy Adelaine and colleagues have summarised this process in Knowledge Exchange, 2020. A reluctance to disaggregate data by ethnicity makes it very difficult to discern what is really happening–beyond that the distribution of funding remains unequal.

Turning to students, a 2020 study entitled Ethnicity, Race and Inequality in the UK: State of the Nation led by researchers from The University of Manchester’s Centre on Dynamics of Ethnicity (CoDE) and the Runnymede Trust found that “ethnic minority groups constitute 26% of all undergraduate students in England [but] are less likely to attend Russell Group Universities, with the Black group particularly under-represented” and that “all ethnic minority groups are less likely than White students to receive a ‘good’ (2:1 or first class) degree”. In terms of representation, the report (drawing on 2016/17 data) highlighted the “under-representation of academic staff [in Higher Education] from all UK-born ethnic groups, notably from Black and Muslim groups”.

Part of the explanation for this underrepresentation in academia is to be found in access to funding. A 2019 Leading Routes report entitled The Broken Pipeline: Barriers to Black PhD Students Accessing Research Council Funding examines the link between the UK BME attainment gap at undergraduate level and students’ success rates in receiving research council funding for postgraduate research. The report found that “sector wide discrimination and bias continue to play a significant role in restricting access to funding and in consequence limiting the number of Black PhD students and academics in the UK”. The report reveals shocking numbers: “just 1.2% of the 19,868 studentships awarded by all UKRI research councils [over a three-year period] went to Black or Black Mixed students and only 30 of those were from Black Caribbean background”.

Equally striking are the statistics for professors in the UK. A recent AdvanceHE staff equality data report for UK Higher Education Institutions showed that for the academic year 2017/18, only 10% of professors came from categories racialised as BAME (7.7% men and 2.3% women). Breaking this down, just 0.6% of UK professors were Black, in the narrower sense (90 men and 35 women). Across the whole of the UK, fewer than five heads of institutions were identified as belonging to groups racialised as BAME (3.1%) and of UK origin. A 2019 UCU study on the career experiences and strategies of UK Black female professors evidences “a culture of explicit and passive bullying [which] persists across higher education along with racial stereotyping and racial microaggressions”. Meanwhile, interviewing 37 UK senior academics racialised as BAME about their experiences of mentoring, Kalwant Bhopal (2019) found that the rhetoric of equality and diversity does not match up with experiences of policy and procedure. 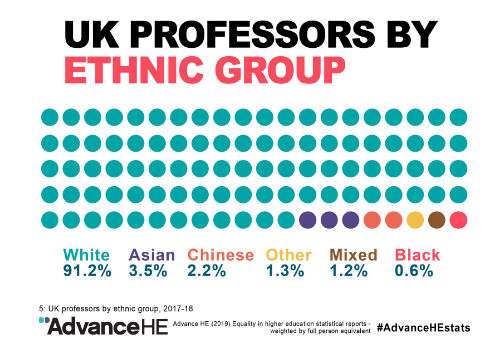 As Black British scientist Winston Morgan writes, a lot of his time “was spent defending [himself] against those who found it difficult to accept that [he] could be a good scientist”. Because many still refuse to accept “that racism or even unconscious bias exists in academia”, forming racial justice equivalents of gender equality initiatives such as Athena Swan has proved challenging. The rebuttal of the very existence of racism is a hurdle that is both frustrating and discouraging, as Leona Nichole Black explains:

Having to shoulder the burden of proof, we as Black and Minority Ethnic communities often refer to the ‘covert’ nature of British racism. I suggest this speaks to our self-doubt, and frustration that the legitimacy of our experiences is routinely called in to question in the face of a tolerant and multicultural Britain. What clearer demonstration of this than the “I, too, am Oxford” initiative by Black students at Oxford University, a campaign exposing BME experience of racism at the institution, and the faux civility of the rebuttal staged by white students, “We Are All”.

This discussion frames some of the problems and offers some suggested resources. Tomorrow, we will be sharing examples of actions that are being taken by Sheffield UCU members as part of our action against workplace racism. The Google Form will remain open to contributions throughout the day; in the event that we cannot transform all of them into public posts in a timely fashion, you will see that the form requests (optional) permission to store the information provided until a later date.