This month: We are officially in dispute over #FairPayinHE, university management has backtracked on their commitment to international staff, and a concerning update on restructures.

The USS Joint Expert Panel is continuing to meet and hear evidence on the methods and assumptions by which USS is valued, and they will be issuing their first report in late September, so watch this space!

In the meantime, USS members will have received an email on 10 July informing you that USS has elected not to wait for the JEP’s report, and to instead move forward in implementing cost sharing measures immediately, to address the ‘deficit’ which they continue to claim exists. This means that USS is imposing a series of increases in employer and member contributions, the first of which will take effect in April 2019.

We are disappointed in USS’s decision to not wait for the report from the JEP, but we hope that in late September when the report is released, we will be able to reach a better deal to replace the contribution increases.

Our pensions officer, Jo Grady, wrote to you earlier today explaining why USS is imposing these increases and how they relate to the April ballot and formation of the JEP, but please do not hesitate to contact us with more questions. We will continue to be in touch as developments occur.

If you haven’t already signed Sam Marsh’s petition to make USS show its workings, please do so! The more information we have about the assumptions underlying our pensions, the better we are able to fight for a fair resolution.

Fair Pay: We are in dispute

As of July 24, UCU has officially lodged trade disputes with each university employer that was part of the UCEA pay negotiations, including the University of Sheffield. In their letter to employers, UCU has clearly identified four areas of dispute, and the actions necessary to resolve them. This included a significant raise to the appalling 2% pay offer, which is just the latest in a long series of real term pay cuts, which across the sector, amounts to a 21% average pay decrease since 2009. 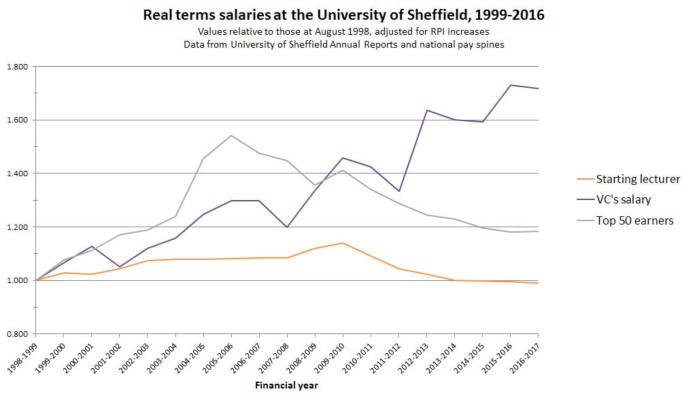 Our dispute is about more than the inadequate pay offer, however:

(a) there is still no nationally agreed plan of action to close the gender pay gap, even in the face of the 2016-17 HESA report of an average 11.8% gap for academic staff across the sector. At the University of Sheffield, the 2017 gender pay gap is 15.2%.

(b) universities are increasingly relying on precarious contracts – HESA has reported over 72,000 staff on highly casualised contracts in 2016-17. This practice is shameful, and reflective of the continued marketisation of the sector, which we must push back against.

(c) despite continuing evidence that excessive workloads are contributing to endemic mental health issues across the sector, 83.1% of HE staff respondents to UCU’s workload survey reported that the pace of their work has increased over the past 3 years.

Help us to get the vote out, both locally and nationally, by talking about the issues involved in this dispute, in person and online!

Most importantly, remember to VOTE! Please check your contact details to make sure they are up to date.

UCU General Secretary Sally Hunt has called a members consultation on whether our union should support the push for a referendum on any final Brexit deal negotiated by the government. While the branch committee agrees that this is an important issue with widespread consequences for members, universities and wider society, there are varied and deeply-held views both on the committee and amongst the membership on the wisdom of calling a second referendum, and on devoting significant union resources to campaigning for it at this time. As such, our advice to members is to exercise their own judgment in the consultation ballot, which will be sent to them shortly.

In May we announced the significant results of a year long campaign for greater support for international staff, which included a commitment from the University Executive Board and the Vice Chancellor to allocate funding to reimburse staff fees related to Tier 1 and 2 visas, including the NHS-surchage, and indefinite leave to remain fees. In addition, dedicated HR support would be provided for international staff, and a system of interest free loans developed to support costs associated with dependents.

This agreement arose out of a meeting with the VC in January 2018, which led to the preparation of a joint paper, co-authored by members of the Sheffield UCU committee, international staff members, and the deputy director of HR. This paper, which specifically proposed and costed the support scheme described above, was submitted to UEB, and in March, we were informed that it had been approved. No mention was made at this time, or any later time, that the NHS-surcharge — which the Home Office has announced will soon increase to £400 per year — would no longer be included in the reimbursement scheme.

This month, we have learned that university management has since backtracked on the January version of this agreement, and the university website now explicitly excludes the NHS-surchage from reimbursement.

We are extremely disappointed that the employer does not intend to cover this exorbitant fee, which following Brexit will impact a much larger segment of staff, and we are especially disappointed that we were not properly informed of the intent to make this change, as it directly contradicts the proposal that we jointly co-authored with members of HR. We are following up on this with management, and will let you know when we learn more.

As we have been indicating over the past few months, the SUCU committee is increasingly concerned with management’s approach to the Professional Services Transformation Project. This concern has reached a tipping point based on the way the ongoing APSE restructure is being conducted, which has led us, along with the other campus trade unions, to ask for an emergency meeting with management.

In light of these events, this committee no longer has confidence that management’s handling of restructures shows a duty of care to staff and students of this university. Please see our statement.

9 August – #LetAhmedStay Fundraiser: Sheffield UCU member and Computing Science student Ahmed Sedeeq is in a protracted battle with the Home Office over his claim for asylum. An appeal against the refusal of his asylum claim is being heard in late August and branch members are helping him fundraise for his legal fees, which are estimated at more than £12,000. You can donate here, or come along to a fundraiser BBQ after work on Thursday, 9 August at the Echo Beach popup bar in the city centre.

Wellbeing is a nice buzzword. But when employers use it, ask why – Emily Reynolds