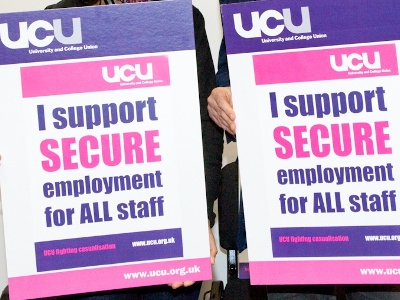 Postdocs play a vital role in research; we are the highly skilled hands and minds that create new things, test out theories and provide hands-on training.  So why do we feel like we go unrewarded and underappreciated?  The answer has a lot to do with fixed-term contracts. Apparently, 68 % of postdoctoral research staff in the UK are currently employed on fixed term contracts.[i]  However, from talking to postdoc and academics within my institution and others, I would estimate that this proportion is actually far higher for your average postdoc with 0 – 8 years’ experience.

Fixed-term postdoc contracts vary in length from a few months to a few years; however, one thing they all have in common is an expiry date. This article collects my fellow postdocs and academics opinions, and my own, to explain some of the unproductive impacts of fixed-term contracts on the wide-scale employment of postdocs.

I’d estimate that the current consensus is that postdocs need to acquire something like 5 – 8 years’ experience (publishing 2- 3 papers per year), to have a chance at securing that dream academic job.  This means that postdocs need to spend the first 5 – 8 years, of their career moving around from university to university, seeking the next contract.  The pressure of constantly having to look for a new job, relocating, making new friends and finding a new place to live has been described to me as “exhausting, frustrating, distracting and demotivating”.

If you have progressed to postdoc status by your mid-twenties (which is about as soon as you can get there) this period of uprooting and moving around coincides with when the majority of people are likely to consider the possibility of settling down and starting a family. Many researchers (in their late 20’s to early 30’s) find it difficult to put roots down and or plan for the future during this turbulent period of moving around. Many researchers also commented to me on how they found their future to be full of uncertainty and grey areas: “If I take maternity leave will I have a job to come back to?”, “Am I eligible for parental leave if my contract is less than 12 months?”, “Can I get a mortgage if I/we are on short term contracts?”

Struggling with a mortgage and childcare / maternity arrangements, are common issues. You may (or may not) also be surprised to learn that even now the attitude toward female researchers remains archaic in some part of academia. It was relayed to me by a fellow postdoc that a particular PI took a very hard line on postdocs returning after maternity leave, putting them in an all or nothing situation, where retuning part-time was not considered an option. I have heard of occasions when female researchers have be told that now they are pregnant that’s effectively the end of their research career. Are we supposed to choose between career and family life…?

Fixed-term contacts leave us with an ultimatum: continually relocate or seriously damage your chance of getting a permanent job in the future by ‘stubbornly’ staying in one place.  But what about those of us who cannot easily relocate?  “As a single parent my career decisions had to be location based. I have had to make sacrifices, choosing not so optimal jobs at times, because of the way the system will affect your career prospects if you do not move.” Those of us with partners (who also have careers to think about), young families, caring responsibilities or disabilities (who may require help with day-to-day living) cannot just move at the drop of a hat.  In short, fixed term contracts fail to promote equality.  When you consider that lots of university departments are keen to show off how much they support equality (e.g. the Athena Swan award in Science related disciplines) it is inconsistent that they employ the majority of postdocs on fixed-term contracts.

Is there a way you can stay in one place? The short answer has been put to me as: “yes, but it doesn’t look good”. There is a redeployment system at UoS, however, postdocs who have used it regarded it as “inadequate and ineffective.” To make things worse, academic staff appear to prefer to select postdocs from a wider ‘world’ market rather than the redeployment pool. Living in the same place and commuting to a different university is also an option, but you would be faced with the same type of fixed-term contract there too.

For those that do manage to stay in one place by securing the elusive open-ended contract there are still problems ahead:  Without a steady stream of research money coming in the contract isn’t really worth a whole lot, and even if you are successful at bringing in funding, it’s difficult to gain the same stature as academic staff.  A long term researcher with 16 years’ experience has observed first hand that “research fellows are not treated equivalently (as permanent academic staff) by the University system”.

What about promotion? Other than acquiring a new role as a research fellow or lecturer, there are no promotional steps you can take as a researcher, which makes progression and development another one of those grey areas.  One postdoc described their situation as being “adrift on the sea of science”, receiving very little in the way of advice and career support from their supervisor.  Although people at the University will tell you that it is the job of the line manager, to help postdocs plan and progress in their careers, the bottom line is that they are overworked (so don’t have the time) or don’t understand the issues (because they are not on a fixed-term contract). A common response from postdocs is that they feel “undervalued” especially when they are “expected to pick up the pieces of over worked lecturers without the credit.”

You can make it work staying in one place, but it’s a lot about luck. You may feel like you are always playing second fiddle to your academic peers, “if you stay in the role long term, you do begin to wonder if you do genuinely have a career and whether any progression is possible, even when demonstrating superior publications and income than your (academic) peers.” The turnover of academic staff is slow and there are many more postdocs than there are jobs (a recent advert for two lectureships in my department attracted around 200 applicants).  For those of us who have already invested several years as a postdoc, there is a difficult decision looming: Do I stay or do I go? If I change career, what can I do with my skills?

Looking forward, how should we fund and employ postdocs?  Right now, I don’t have the answer, but I do know that it requires a big, bold change.  I think a key issue is that the fundamental building blocks of the system fail to promote equality and are un-suitable for the future. As researchers, we know that a good research proposal relies on solid principles and clear aims, lets apply the same approach here.

Ultimately we want to achieve fairness, stability and clear continuity into postdoctoral employment, so we can focus on our work, instead of the next pay packet  The university could aid this by: Using bridging funds more effectively with open ended contracts to ensure continuity; developing alternate career streams, e.g. career researchers, to provide promotion into areas other than academic positions; challenge the out-of-date culture surrounding postdoc by nurturing and promoting home grown talent to the wider community.

The problem is a shared one, we all (individuals, universities and research councils) have a responsibility to ask questions, stimulate discussion and implement change. In order to promote equality across the university as a whole, using a fair selection process, we first need equality in the pool of talent.

Fixed-term contracts are archaic leftovers from academic cultures of times gone by, they are a barrier to equality, and to the future of academia.  They are having an impact on current postdocs and on those starting out in research, one PhD researcher said “I’m done with research after my PhD, I don’t want to be in the same situation as you (meaning myself) 3-4 years down the line.  It’s a lot to gamble on, when you may not achieve what you set out to.”