This year’s UCU congress prepared the ground to put the union at the forefront of the campaign to defend Post 16 Education. Despite the conference being cut short by a day, due to the RMT proposed strike, delegates passed a raft of motions that provided a frame to launch a real campaign to mobilise members in defence of Further, Adult and Higher Education involving demonstrations, lobbies, strikes and conferences.

Despite the sobering fact of another five years of continuing Government attacks on both sectors there was a real determination at congress this year to mobilise members in the universities and colleges. A motion calling upon UCU to organise a national demonstration in defence of post 16 Education was passed unanimously. In the Further and Higher Education Sector conferences a motion was passed to support ‘Saving Lifelong learning’  and Defend the Public University conferences as part of this campaign.

Delegates were enthusiastic about building the lobby of Parliament on the 16th June to stop the 24% cut in the Adult Education budget. Sally Hunt, General Secretary, made clear the whole union was behind this campaign. She told congress that the union would fund coaches to take people to the lobby and urged branches to fill them. A motion was passed in support of the People’s Assembly demonstration on the 20th June and delegates encouraged branches to be a part of the UCU Save Lifelong Learning contingent on the demonstration.

Motion: Education from cradle to grave and call for a national demonstration in defence of post-16 education

Coordinating action to save every job and every student place

Across the country branches and associations are facing a wave of S188 redundancy notices.  Delegates told Congress and sector conferences of plans to attempt to coordinate strike action. In London 12 FE Education branches and London Metropolitan University either have or are about to start balloting their members for strikes and the first day of coordination in the capital will be on 23rd June.

There is also a second day of nationally coordinated strike on the 30th June which could see branches from Wales and Yorkshire and Humberside Region join the day.

Coordinate to defend jobs and courses

Both sector conferences voted to ballot members over this year’s pay claims if the employers fail to meet UCU’s demands. In Further Education a campaign to win £1 extra per hour was launched and a national ballot will take place as soon as possible on the 2015/16 claim. In HE delegates voted to recommend to reject a 1% pay offer and to ballot members for strike action to pursue their claim.

Motion for a FE pay ballot

Motion for a HE pay ballot

The anti-casualisation campaign had a high profile at conference and a number of important motions were passed calling on UCU to organise a joint lobby of Parliament. Congress supported a motion in support of the national demonstration at Warwick on June 19th against casualisation and Teach Higher.

Motion carried for a Joint lobby of Parliament on casualisation

Congress debated a motion that called upon UCU to organise a conference to start a discussion about political representation. A brief but interesting debate was had where the mover of the motion argued that what the general election showed was that all mainstream parties have lost the ability to address the concerns of working people.  The mover continued to argue that the SNP’s landslide victory in Scotland, Syriza’s success in Greece and the rise of Podemos in Spain show that new political formations espousing a clear anti -austerity case are starting to develop. The motion was passed by a margin of 2:1.

Motion calling for a conference on working class representation

Congress discussed a Boycott Divestment and Sanctions motion in solidarity with Palestine. The General Secretary read out legal advice stating that according to union solicitors, if the motion were passed it could not be implemented. The chair informed the Congress that the motion would be null and void. Despite this the motion was discussed and passed by an overwhelming majority placing UCU at the forefront of the campaign to support the Palestinian people.  Motion on UCU and BDS campaign.

Congress passed a motion condemning the cancellation of the Southampton conference as an attack on academic freedom.

Motions were passed overwhelmingly to ensure UCU has clear policy to challenge the anti-immigrant hysteria during the election. In particular to promote and use the excellent UCU/CLASS pamphlet, Why Immigration Benefits us all that exposes the myths and lies that surround immigration.  The motion called upon UCU to produce a multiculturalism teaching resource pack.

Motion: Resisting the politics of austerity, hate and injustice

One of the more contentious issues at Congress was about how to oppose the Government’s Prevent strategy. Motions called for a boycott of Prevent. Delegates spoke passionately in support of the motion arguing that they did not want to act as Government spies and lose the trust of their students. As one speaker put it, ‘Every time you hear the call to uphold British Values, you know it is a call for racism and xenophobia’.  The General Secretary gave legal advice from UCU lawyers, of the difficulty and complexity of organising a dispute on the issue. However, it was agreed following overwhelming support for the position that the Recruitment Organising and Campaigns Committee would oversee a way to implement the demands of the motion.

Delegates brought motions to Congress expressing the frustration and anger of black members at the widespread institutional racism they face in the sector. Motions were passed calling on the union to train and develop more BME reps and ensure proper representation at all levels within the union.

The announcement, by the chair of UCU’s equality committee, that the Irish people had voted in their referendum to make legal gay and lesbian marriage sent a wave of excitement and joy around the congress room. 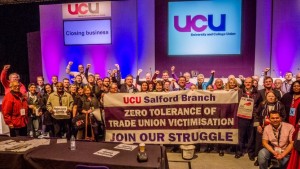 There were many motions brought to conference and passed unanimously in defence of union activists who have been victimised as a result of resisting cuts. Congress heard of a growing list of victimisations including the sacking of union reps; the Markey’s at Bolton University, at Salford University; the sacking of Michael Starrs from the College of North West London and the victimisation of Sean Vernell at City and Islington.  Congress delegates argued that we need a rapid response to these victimisations and the union must throw all its weight behind all anti-victimisation campaigns to ensure that branches provide maximum practical solidarity.

Austerity and the curriculum

Motions were passed that challenged ‘austerity of the mind’ and how UCU can respond to the ideological attacks on the curriculum, such as a symposium to bring together English and Maths teachers to discuss the curriculum.

Austerity and the curriculum: English and maths

All Congress and conference motions

There were many important debates on issues of equality, especially Disabled members and performance management  issues. TUOS were congratulated on the webpages on Disability leave policy.

Debates on the REF, lesson observations, workloads, Prison, ACE and many more. Click here to see all motions that were passed at Congress and Sector conferences.

Some key motions passed on support for Academic related/professional service staff and recognising their role within UCU. This was a key issue if the union is to remain inclusive and represent all members. UCU is also raising its game on the professional development front, its course are attracting a great deal of interest, especially from under- represented groups such as our black members.

June 23rd / 30th coordinated action to defend jobs threatened as a result of the 25% cut to adult education.

With acknowledgement to UCU left for permission to adapt this report