Thank you so much to everyone who came along to our Emergency General Meeting yesterday to discuss the dispute. We talked about the progress of negotiations nationally on both the pay and pensions disputes, and since then a further meeting with UUK has concluded with no real movement from the employers. There’s a national UCU meeting to discuss the progress of the USS dispute this coming Friday that we’re sending branch delegates to – we’ll report back from that meeting as soon as we can afterwards.

We know from the communications we’ve had with national negotiators that the industrial action is having an impact on these talks, but we consider it unconscionable that it’s taken seven days of strikes to get this far. Our employers’ representative bodies are gambling with students’ education and sitting out this round of strikes in a way that it’s difficult to view as anything other than hugely cynical. We urgently need VCs across the country to step up and show some actual leadership and we will continue to do all we can to encourage Koen Lamberts in this effort. We have written to the VC asking him to take a set of concrete actions to further the USS dispute, and will be writing to him shortly regarding the pay and conditions dispute. 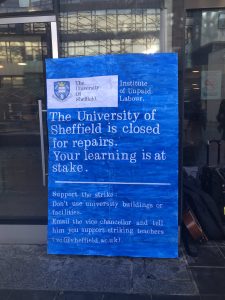 Local negotiations have continued positively. We met the VC with officers from the SU again on Monday and covered a range of issues, including ongoing concerns around Tier 4 students, better student representation in the allocation of deducted salary money, and a discussion of the national picture.

Tomorrow is our eighth day of strike action, and Thursday we will commence ASOS. As a capstone to our action, we are holding two post-picketing events. We are holding a joint rally with the Students’ Union. Gather on the SU concourse at 11:30 for an 11:45 start!

Later in the evening, we are hosting a fundraising party for our local fighting fund, starting at 7pm at DINA on Cambridge Street. There will be food, music, karaoke (strictly optional, bad singers positively encouraged) and some time to relax and let our hair down after all our efforts. Register for the party here and please register friends and family members as well!

In order to facilitate a swifter release of the salary deductions monies to departments, we are asking all members to complete their strike notification forms as soon as we are back in work on Thursday, and certainly no later than the end of the following week. We will email all members on Thursday morning regarding reporting strike days, but we ask all of you to use our reporting form instead of the one that HR has provided.

Action short of a strike (ASOS) will begin on Thursday 5th December. This particular round of ASOS is asking members to refuse to undertake voluntary work, not cover for absent colleagues, not reschedule lectures or classes cancelled due to strike action and to work to contract. There is detailed information about what that means here and if you have any questions or concerns about ASOS, please contact us. We’re asking departmental reps to schedule meetings for members in departments about ASOS as soon as they can after we return to work – ASOS is collective action that is most effective when all members are upholding it together.

As you are aware, salary deductions will not kick in until January and February for salaried staff. Early in the new year, we will be sending information about claiming from either the national UCU fighting fund or the local hardship fund to all members. We are conscious as ever that hourly-paid staff will not be deducted in the same way as staff on contracts, and we urge any members affected by this to contact us for more information on financial support. You will need some communication from your department that confirms the work that you should have been undertaking that you will be unable to claim for or be paid for due to strike action – this can take the form of a letter or email. Our local hardship fund is here for anyone who will experience significant financial difficulties due to strike action and we strongly encourage anyone who needs it to make a claim.