Does the decision to close Archaeology make financial sense? Not on UEB’s figures.

In May, the University’s Executive Board (UEB) announced the results of a review they had conducted into the future of Sheffield’s Department of Archaeology. The review proposed choosing from one of three options:

The three-option set-up was plain for all to see, and to no great surprise UEB recommended the ‘compromise’ of option 3 to Council: Archaeology would cease to exist as a department, though small amounts of its activities would continue in other departments. As expected, Council backed its executive board and rubber-stamped the decision.

There has been much discussion over the processes that led to this decision (were students treated ethically during the review? why did Senate not provide a clear recommendation to Council?), but the financial aspects of the decision-making are yet to receive much scrutiny. If you assumed the decision to close Archaeology was in the best financial interests of the University, then think again: the numbers tell a different story.

You could be forgiven for thinking the financial case for closure would be clear cut. Archaeology was making a loss as a department, so closing it and retaining its strongest elements would cut the losses and retain the profitable elements, putting the University in a better financial shape over the long-term. Or so the story goes.

The review document contained 5-year financial projections under the different options. It claimed the figures show “immediate cost savings and further saving realised following teach out which could be re‐invested into retained areas of strength and into other academic departments” in option 3 (closure and realignment). Meanwhile, option 1 (investment) “requires a large upfront investment, with limited evidence that the investment will address the challenges faced by the Department”, and warns that “the university will not recoup the investment if a) cross disciplinary programmes are not viable; and/or b) the department is unsuccessful in the development and expansion of the consultancy offer”.

A version of the review document was released as part of a Freedom of Information request (look in ‘FOI Papers.zip’, document 6). While it has some redacted figures, it contains enough information to assess the validity of the claims made. Interestingly, Senate wasn’t trusted with the full figures, and also received the redacted version.

First, the claim that closing the department generates immediate cost savings. On first glance, one can find in option 3’s figures a row for “cost savings” versus the status quo, which start at £620k per year in Year 2, rising to £1.2m per year in Year 5. But these cost-savings are more than offset by redundancy payouts and a projected loss in income of £1.2m in Year 2, rising to £1.5m in Year 5 (see Figure 1). In other words, there are no “immediate cost savings… which could be reinvested into retained areas of strength and into other academic departments”: quite the opposite. Closure of the department will cost the university hundreds of thousands of pounds per year.

By 2025/26, our analysis of the figures (not refuted by University management in our dispute meetings) shows that choosing option 3 over option 1 has a cumulative detrimental impact of over £1.6m. That is, by recommending closure of the department, UEB expect to be worse off to the tune of around £1.6m in five years’ time. They may have found a way to send the departmental deficit towards zero (after all, a department that doesn’t exist can’t lose you money), but the University as a whole takes the hit. Shared costs will be passed on to other departments. We all lose out.

Figure 1: Sheffield UCU analysis of the financial implications of options 1 and 3, based on UEB figures
(Spreadsheet available here) 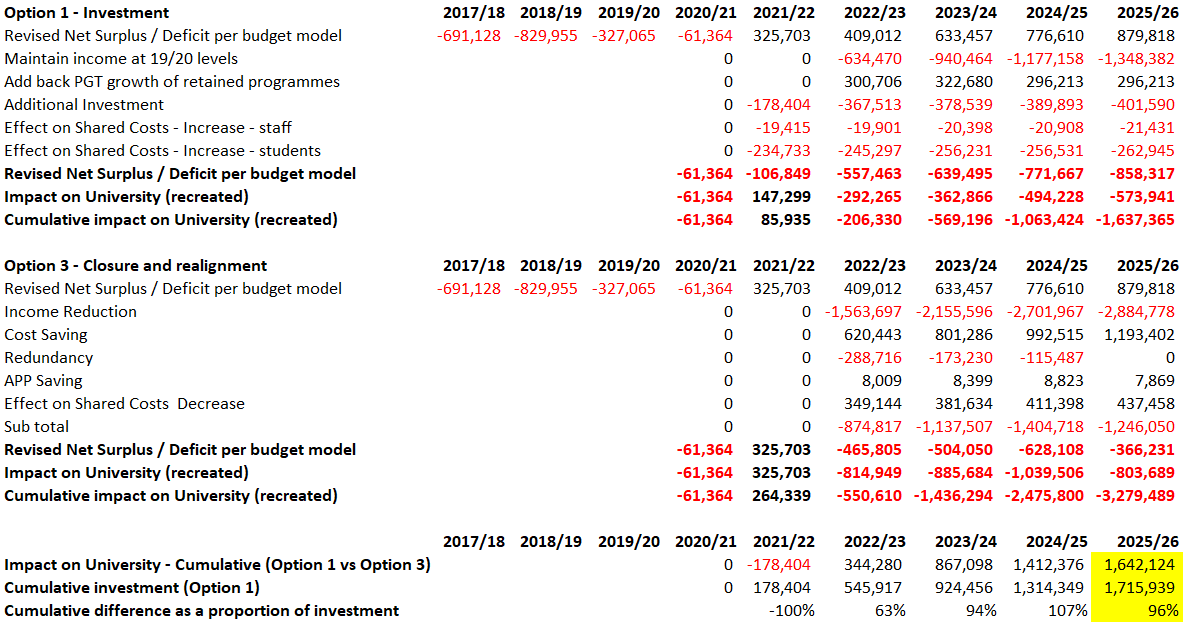 Next up, the claim that the University may not be able to recoup the investment inherent in option 1. And again, one can see a row for the planned investment under option 1, starting at £178k in Year 1, rising to £402k in Year 5. In total, this represents a cumulative investment of £1.7m by Year 5.

The first thing to note is that there is no allowance for any improvement in income as a result of this investment, either in terms of improved student recruitment or improved grant or consultancy income (this is put down to “prudence”). But even without any allowance for this, option 1 still beats option 3 to the tune of £1.6m cumulatively over 5 years, as described above. In other words, the £1.7m investment to keep the department open will recoup itself and provide a £1.6m improved financial position over ‘closure and realignment’ over the next five years, representing a 96% return on the investment. In taking option 3, the university is implicitly setting itself a challenge of being able to find an alternative investment that doubles its £1.7m stake. It won’t manage it.

And then we get to the investment outlay itself, which is included under option 1 but not under option 3, despite UEB’s commitment to targeted investment in the areas it proposes to realign. If this unspecified level of investment were to be included in the figures for option 3, the financial benefits of keeping the department open would be even more pronounced.

Were the financial best interests of the University taken into account in the decision-making?

We are yet to see evidence that the financial best interests of the University as a whole were properly taken into account in reaching the decision to close the Department of Archaeology. There is no indication that UEB discussed them in reaching its recommendation (see the minutes of the 25 May meeting), and Senate had the necessary information redacted. We are used to seeing financial arguments as central justification for decision-making, so it seems unusual for them to be kept out of the picture here. It is hard to shake the feeling that the financial best interests were at odds with the recommendation UEB was keen to make, so they were kept out of sight and out of mind.

We are yet to see minutes of the Council meeting where the final decision was made, which will not be publicly released until October. Whether Council properly interrogated the financial implications of the recommendation they received from UEB, time will tell.